“I just built this in LA!” On his ninetieth birthday, architect Frank O. Gehry stood in front of Giovanni Bellini’s “The Feast of the Gods” and pointed to a section of forest in the painting, in front of which satyrs and other figures of mythology were encamped. Half a millennium later, we encounter Bellini’s personnel again in the new picture cycle “Renaissance 8” by Anna Lena Straube, which already in the title with the standing infinity-8 announces, quite in the sense of Nietzsche, an “eternal return of the same”, because Renaissance means rebirth. Familiar images circulate through the centuries; only the artists are different, through whom the necessary images are painted again and again. Thus the maenads and satyrs of a Bellini and Mantegna circulate in their neo-Renaissance paintings, or the blue wind god Zephir from Botticelli’s “Primavera” hangs in a tree. Straube’s protagonists celebrate a basic form of Renaissance and antiquity, the “thiasos” as an orgiastic and self-forgetting round dance of Dionysus and his entourage. These hypnotic dances were “performances” and the twelve-part cycle of “Renaissance 8” is about such performances as the inner ground of the paintings. As in the paradoxes of the Renaissance – demigods, satyrs, and so-called “wild men” animate ordinary people to perform unusual deeds and thereby make them rise far above themselves – Straube’s performers are also strongly differentiated in character.

In contrast to Botticelli’s precisely balanced ideal compositions, however, Straube leaves the composition to the irrepressible energy of a literally motley troupe: she gives the gaggle of friends and strangers free rein to roam and conquer a Berlin park, with the only proviso that they are all not commonplace and beautifully dressed in flowing fabrics as Warburgian pathos formulas, and that they do not talk to each other, but react attentively to each other only physically. From the flood of images that emerge, she selects the most exciting and picturesque. While Botticelli’s “Primavera” with its basic mood of a golden age had a political statement through the “buon governo” of the Medici, the political aspect of Straube’s “Renaissance” lies more in its freedom: each figure has sought its own place in the picture, and despite all the differences between the performers, new connections and groups are formed again and again. Metaphorically, this reflects the artist’s basic conviction that even the most heterogeneous people can come together “conspiratorially”, i.e. “animated” in Latin, while preserving their differences.
“Here time becomes space,” writes Nietzsche, and in Straube’s backgrounds, animated spaces from the most diverse styles and times unfold, swirls of ornaments form time tunnels. In “M,” the iconic silhouette of the twin towers of Berlin’s “Peacock Island” pleasure palace emerges. In “P,” the dreamlike stucco pendants of the Alhambra in Granada fan out. In half of the pictures, however, it is the rococo rooms of Berlin’s Charlottenburg Palace that form the background, previously photographed by Straube at an accentuated angle with many parallaxes. Several times the lines coincide in such a way as to create an unreal mood. In the image “A,” for example, the already oversized crown of the architecture of the Charlottenburg Palace Chapel pushes forward in such a way that it seems as if it wants to overtake and crown the half-naked woman hurrying toward us. Such surreally moving and stretched spaces are familiar from dreams. The paradox arises that the collaged figures in the foreground, despite their costumes and partial nudity, seem more real than the constructed spaces in the background. The satyr-like figures gain in authenticity the more dreamlike-surreal the spaces behind and in front of them are, because in the foreground layer everything except the faces is covered by the artist’s typical drips. It rains color, as in fantasy. With her, Nietzsche’s aphorism could be extended to “Here time becomes a dream”: the absolutely free, seemingly eternal juxtaposition perhaps only exists in the sphere of art, but with Straube it is perfect in form. 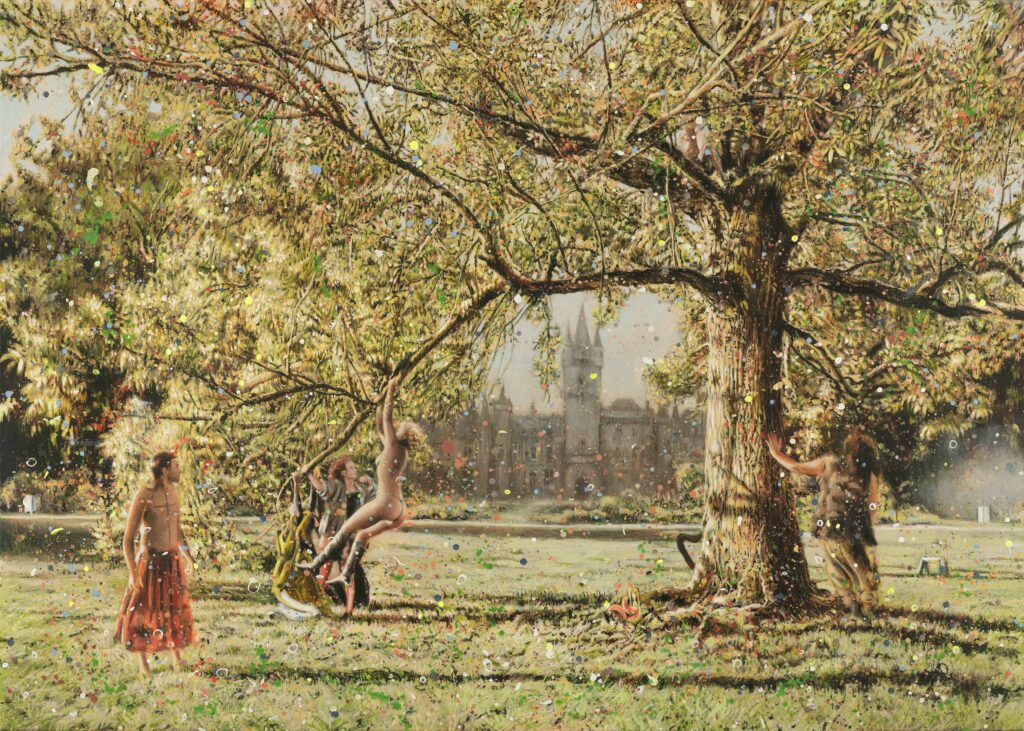