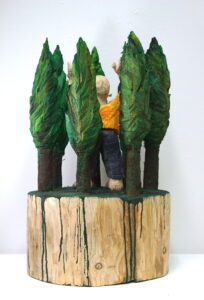 Daniel Wagenblast (1963) studied from 1984 to 1990 at the State Academy of Fine Arts Stuttgart under the professors Peter Grau and Rudolf Schoofs. This was followed by his studio in Stuttgart, several months of study in the Canary Islands and USA – travels, as well as the beginning of the series “Yellow Cab, N.Y. “1995 several months stay in the “Villa Romana”, Florence (with Isa Dahl, VR – prize winner 1995).1992 Wagenblast received the 1st prize at the competition “Young Art in Ostwürttemberg”. 1993 the 1.prize at the national competition “Das Alter” followed. 1994 the recognition prize “Musical”, Deyhle, Stuttgart. 1991 to 1994 followed a studio scholarship of the State Academy of Fine Arts Stuttgart and the State of Baden-Württemberg.1996 Scholarship of the Art Foundation of Baden-Württemberg, 1999 guest work stay in the manor house Edenkoben, Palatinate, 2000 an invitation as twin-town sculptor to Barnsley, England “City Artist 2000”, Spaichingen, 2001 the 1st . Prize: competition: fountain in the market street, Ditzingen, 2004 a working stay scholarship “Zeppelinhaus”, Berlin working stay in the State Ceramics Manufactory, Majolica Karlsruhe, 2012 to 2015 a working stay studio “Zeppelinhaus”, Berlin, 2018 a working stay in the State Ceramics Manufactory, Majolica Karlsruhe and 2021 was the founding of the project initiative “papatochterag”.

Daniel Wagenblast is a master woodworker. His figures are rather prototypical and, not unusually, oriented to the figure of the artist, at least in the case of male figures. Not portraits do we see, rather people like you and me. The deliberately left roughness of the surface takes away much of a possibly illusionistic impression – it is precisely the artist’s reality that we encounter in the works, which at a distance from the reality we perceive immediately becomes the truth. Wagenblast’s works are characterized by a very unique aesthetic, they are wonderfully colorful and unmistakable. Although they are usually not very large, they are characterized by a beautiful tendency to monumentality and also to a self-assurance that is at rest in itself, and one has little difficulty imagining them larger than life, as demonstrated here in the marketplace. The sculptures do not kick the viewer in the butt, they gently nudge him and that is usually enough to trigger thought processes. These can go in different directions, he does not fix the viewer to one way of looking at things and that is good ( Martin Stather, Society of Friends of Young Art, Baden-Baden, 8.2.2015).

The artist lives and works in Stuttgart.