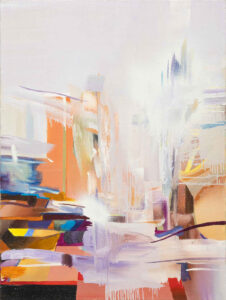 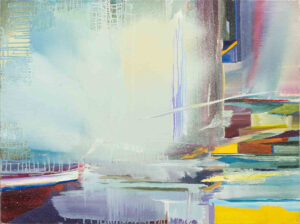 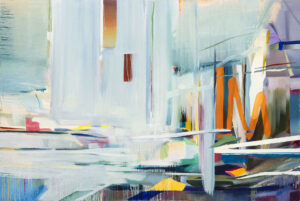 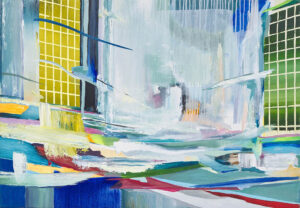 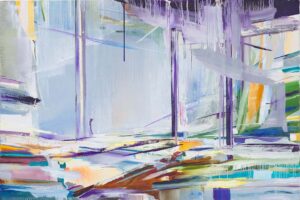 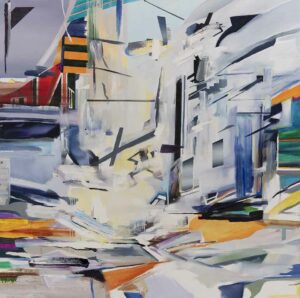 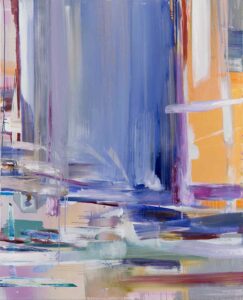 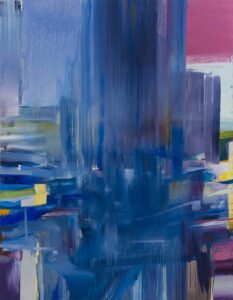 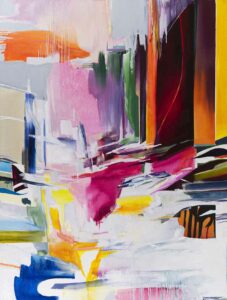 Without a doubt, Florian Fausch’s pictures are utopian architectural landscapes whose rules function according to their own laws; they are places and non-places at the same time that revolve around the concept of the image. Familiar and yet so alien, they invite us to lose ourselves in the pictorial space with open eyes. In the deserted, enigmatic paintings and works on paper, there is not only an above and below, a right and left, a foreground and background. Here, interiors meet glass fronts, stairways meet skyscraper facades, mountain ranges meet potted plants. Landscape and interiors are fanned out and split, interlocking with and into each other to create something entirely new. Clearly outlined sharp lines define architectural elements, which in turn lose themselves in non-representational motifs. This creates a simultaneity of different levels and painting styles.

Florian Fausch’s works are located in the border area between representationalism and abstraction. The angular forms are reminiscent of the cutting techniques of collages or stencils used for geometric compositions. To find the image, he uses the collage technique, but in a contemporary form. Magazines, computer games and the Internet serve the artist with their gigantic image archives as a fundus. As a so-called “digital native”, he not only goes in search of motifs on the Internet, the electronic possibilities also serve him quite naturally as a working tool in terms of the image structure, which is partly created on the computer and in a further step is transferred to the canvas or paper. During the painting process, the fragments of the appropriated interweave with his own ideas; reality and utopia merge into a dynamic overall effect.

In Florian Fausch’s work, architecture becomes the abstraction of color. Spatiality and depth effect arise from the deliberate use of an unusual, contrasting luminous color palette, but also through the special painting method. He applies the oil paint in thin, transparent layers on top of each other, so that the different layers of the picture become perceptible. In certain places, the canvas still shimmers through and allows a glimpse of the painting ground. Through the layers of paint with their empty spaces, the painting becomes tangible in its physicality. At the same time, the painter, who trained in Düsseldorf, succeeds in creating an illusionistic effect with the composition of the picture, so that actual and pretended space meet. His compositions testify to a specific interest in the marginal zones of painting.